Highways England‘s area contractor EM Highways and WBM Groundworks were contracted to resolve a flooding issue on the A38 at Bittaford. During heavy rain an existing French drain was unable to cope with the volume of water which resulted in flooding of the carriage way.

EM Highways wanted to increase the volume of the drainage and line it to reduce maintenance and leakage. The 413mm deep Trapezoidal SmartDitch was specified to line 230 metres of the ditch.  Accessibility to the site was difficult so SmartDitch was selected because of its ease of handling, quick installation and  low maintenance.  230 metres of ditch were installed in 2 days by A crew of 4 without any mechanical handling equipment. Mike Follett of WBM Groundworks said “SmartDitch was very easy to install and very easy to handle. We would definitely use it again.”

Click Here For The Full Case Study On The A38 Bittaford 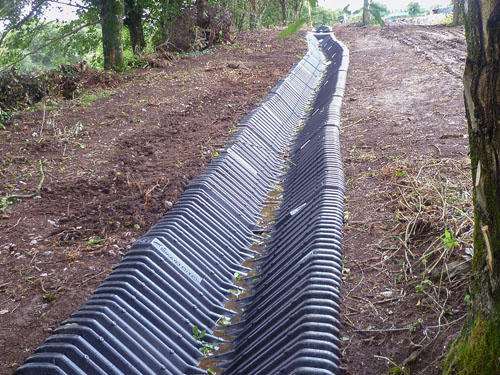